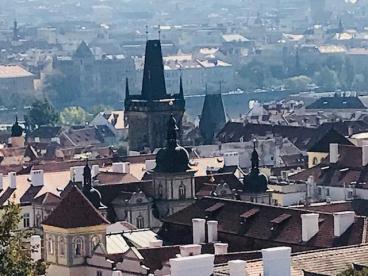 Also known as the city of a hundred spirals, Prague’s architecture, history and energy has awed me since my first visit in 1991, and it certainly didn’t disappoint during my recent visit.

In December 1989 Czechoslovakia gained independence from the soviet union. Previously under communist rule since 1948, citizens feared persecution.  They were intimidated, interrogated, and imprisoned at the will of the secret police.  I toured Russia and many Eastern European cities after the dissolution of the USSR,  when a renewed independence seemed to prevail, albeit a slow and desolate one.  My most vivid memory was enjoying local musicians playing the Doors and other American classics along the iconic Charles Bridge. At a nearby cafe a friend and I sipped a cocktail while taking in the surrounding music, statues and spirals.  Not many tourists or tour buses existed then, in fact even though the vibe seemed good, the streets were fairly empty.  I bought a Bohemia T-shirt and cherished my limited visit, vowing to return in the future. 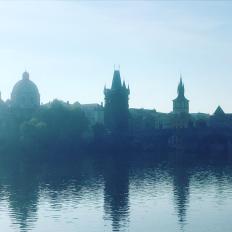 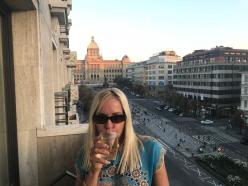 Our quaint hotel was located near the popular Wenceslas Square, lined with restaurants, shops, and hotels. We had a view of the Prague National Museum which unfortunately was closed for a few months of renovation.  We dined at a traditional Czech restaurant and booked a guided bus and walking tour for the following day. 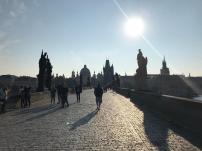 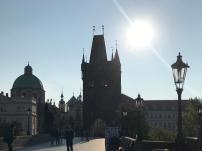 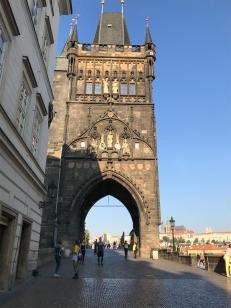 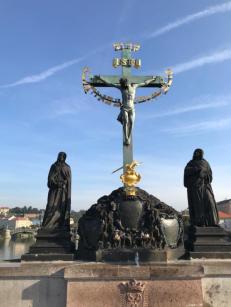 My morning run through the city and along Charles Bridge ranks among the top ten.  The bridge was not crowded at that hour, but strangely Asian brides and grooms posed with professional photographers all around old town, the castle and the bridge.  I wondered what marketing they did in Asia for wedding photos in Prague.  My run became longer than I’d planned when I found myself lost while trying to find our hotel.  I have jogged cities around the world but this was a first, the trapezoid layout seemed a bit off of the normal grid.  Complicating the matter, I had forgotten the name of our hotel.  I had to call my husband and put it into my phone for GPS tracking.  I made it back for a quick shower before our 10:00 tour. 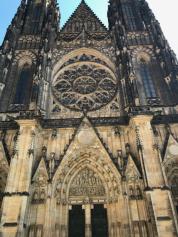 Our excursion took us through town with a fifteen-minute van ride followed by a two-hour walking tour.  Awesome for me, not so much for my husband with an arthritic foot.  We started at the impressive Prague Castle, where many tour groups gathered.  Luckily we were a small group.  The castle complex is quite large, our guide covered the history and architecture while not venturing inside for a more in-depth view.  This was perfect for our first full day in Prague as a good general overview.  After the castle we landed at Charles Bridge, my favorite I cannot get enough of landmark.

It was so crowded we lost our tour guide until the other side where we randomly ran into our group again near the famous astronomical clock.  From my past visit, I clearly remembered the medieval clock located in old town square.  On the hour a mechanical parade the twelve apostles sets in motion other events such as a skeleton striking time, a rotating calendar and astronomical dial.  Considering when it was built, it was impressive to watch.  Myth has it that if the clock is neglected the city would suffer.  I hoped the myth was not true since the clock was not working and under renovation during our recent visit. 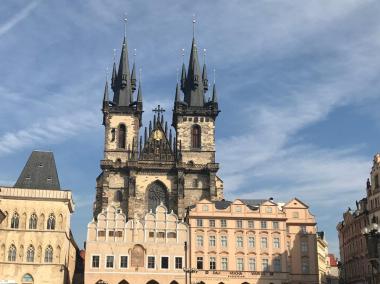 Our tour ended in old town square, a great place to end a tour with open air restaurants great for people watching which we did while dining.  Afterwards, we walked meandering streets full of quaint shops, churches and museums. We visited an interesting sex museum followed by a church visit to admire the architecture, alters and paintings.

The following day we opted for a hop on/off bus to just sit and listen while admiring the view, not getting off until we had the full loop, stopping just shy of our hop on point. My mom texted me the previous night to ask if I visited the infant of Prague.

“I remember saying prayers to the infant of Prague when I was little.”  She said.  “Your grandma used to tell us about it.” 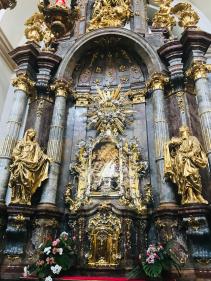 I adored and loved my grandma dearly, so I decided I must visit, although I’m not religious myself.  I also wanted to get a photo for my mother who prayed to the infant.  It happened to be within walking distance to our hop off point.  The church holding the statue wasn’t overrun with tourists, in fact it seemed rather quiet and humble.  Inside, devout Christians prayed, and a small line lead to a passage in front of the statue for a prayer or picture.  Although its origins are unknown, the miniature statue has survived many wars and has become symbol for devotees worldwide.  Many who have prayed to infant Jesus claim miraculous healings and blessings as a result.  His clothes are changed seasonally according to liturgical tradition. 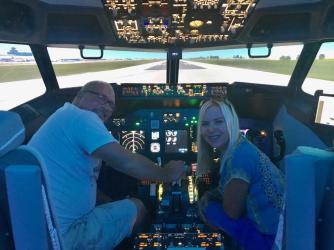 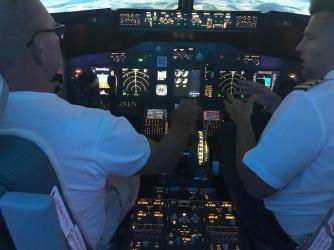 The neighborhood was off the beaten path and we decided to walk around and explore.  My husband, Brad, and I happened upon a pilot bar, and as pilots we had to check it out.  It was a bar designed like a 737, complete with a simulator.  My husband sat in the cockpit with his co-pilot/instructor, as a flight attendant brought me a drink to watch from the front row.  After a briefing, he took off and flew the virtual reality-based simulator.  Through the windows, I watched the control tower and ramps pass by, and then we were in the clouds.  His landing was great and then he did a night flight, and a few more flights in different environments.  The instructor, a captain of a 737, shared stories of flying into difficult countries and complex scenarios.  It was entertaining and educational.

Once outside I recognized where we were and it seemed easier to walk back to our hotel, instead of waiting for the bus.  Later that evening, an Indian restaurant near our hotel was excellent dinner choice.

We realized at the airport that we’d be flying back to New York on the 787 Dreamliner, the newest plane in the Polish Airlines fleet.  In first class we had plenty of room, were well fed, and each seat folded down into a twin bed.  A perfect end to our brief visit to Gotham City. 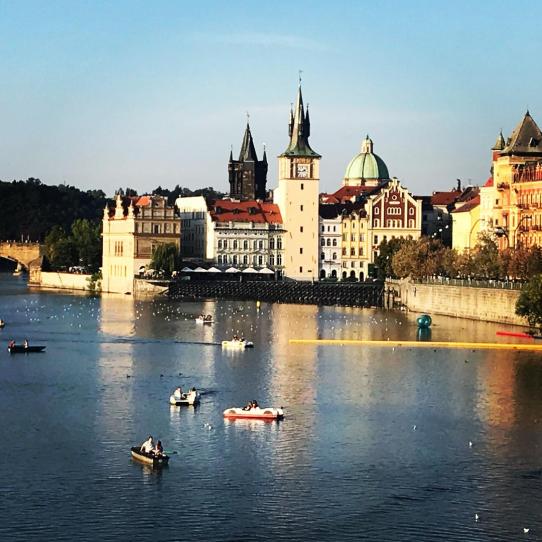 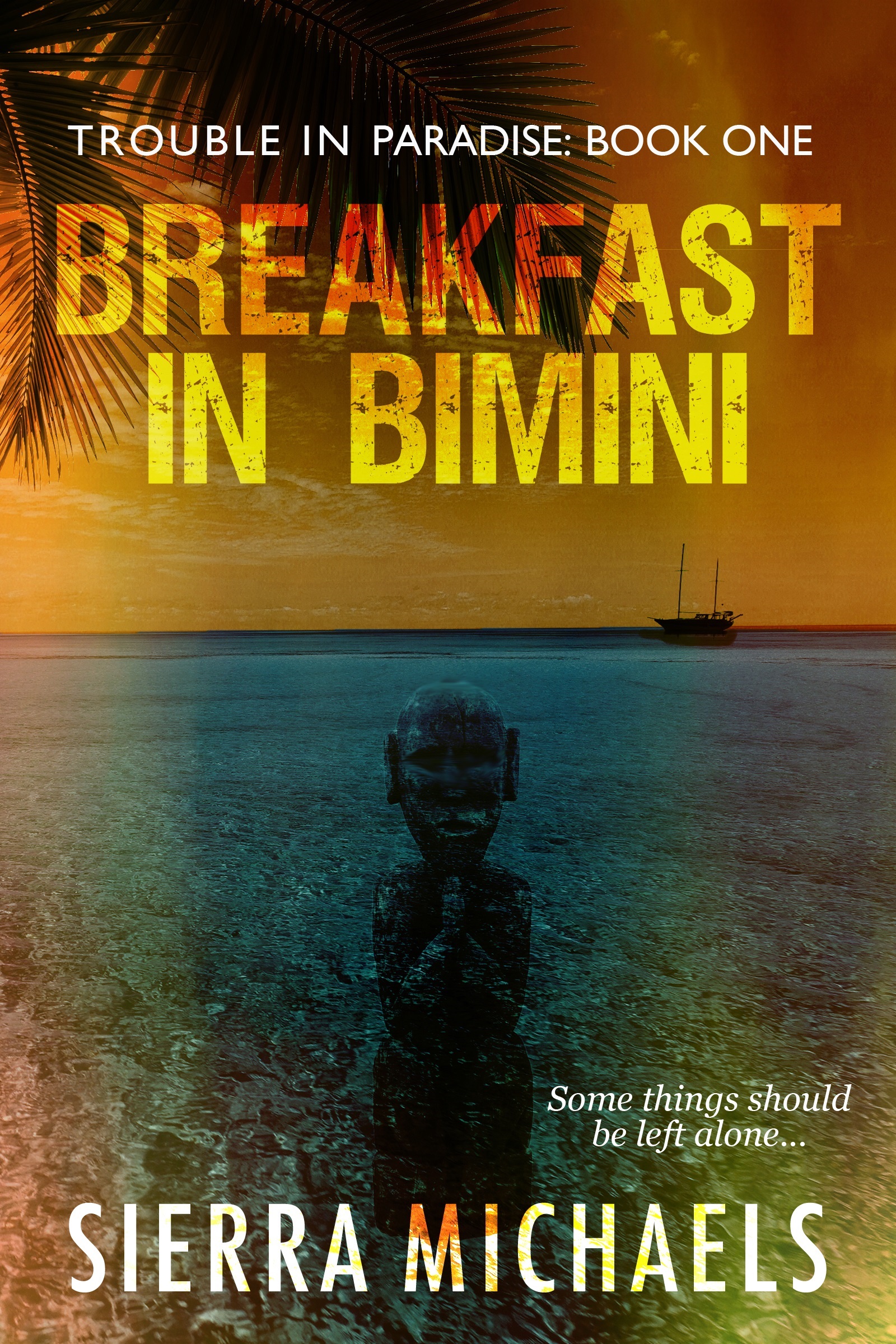