This past Sunday morning about 10,000 estrogen infused bodies raced through Central Park for a 13.1 mile run known as the More Fitness Women’s Half Marathon.  I walked  from my hotel to the starting line with a  triple skinny latte in hand.  After stretching and finishing  my Starbucks “wake up call,” I found my 10 minute per mile pace group and then confidently decided to advance to the 9 minute mile crowd in an attempt to improve my race time. Pace is overrated. I convinced myself that I became faster since the application process.

As typical during marathons the National Anthem signaled commencement, but I was slightly disappointed not seeing the American Flag flying high on a crane, building or a fire truck would have been perfect.  It gives us as Americans something to salute, focus on and motivate as in other prominant marathons.  I got over it realizing that each race is unique. Moving with the crowd I started my marathon playlist on my Ipod nano as I trotted over the official starting line triggering the race chip tied to my right shoe.

As I jogged I noticed most runners had the chip attached to their right shoe with the occasional lefty thrown into the mix. Odd, I thought.  Are more runners left-hemisphere dominant?    This would be an interesting study I concluded after observing the shoes of my fellow athletes.

Sunbeams danced through giant American Elm trees shadowing statues of famous poets in an area known as “Literary Walk.”  Soon after, I passed an Egyptian obelisk and pondered the many obelisks I’ve ran past in my youth.  Egypt, Rome, London, and the Washington Monument, although my husband cringes at the mention of me calling it an oblisk, it is in fact derived from an ancient Egyptian tradition.  I also passed a random panther statue perched on a rock outcrop overlooking our running path. I have no clue to its history but it inspired me as did many other scenes along the way. 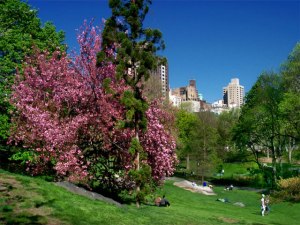 The flora in full glory during spring is translucent enough to see endless massive structures hugging the park.  Skyscrapers, apartments and hotels tower above nature dominating the city in only a fashion New York could pull off.  It’s the perfect marriage of the natural and built environment.  Each one superior in its own right but together a masterpiece, a work of art unlike any other.

A  never-ending wave of neon, pastel and crayon colored females snaked through a downhill asphalt path only to rise again to a challenging spot known as Harlem’s Hill.  Twice I had to endure this incline and at mile 11 it was quite the challenge on my legs.  Almost unnoticeable the first time  due to the curves in the landscape and adrenaline, the second round I felt the burn in my shins, thighs and hamstrings. I overcame the pain and pushed on for another 2 miles.

I didn’t achieve my “personal best” during this race nor did I find my husband at the finish line due to the overwhelming amount of runners and supporters.  However, this race was a divine experience leaving me with a new appreciation for Manhattan and the treasure she holds.  The “City That Never Sleeps” is cleaner, more beautiful and more rewarding than I had imagined and experienced in the past.  I will be back and I hope others will appreciate the beauty she holds….and yes, the city is a she to me.